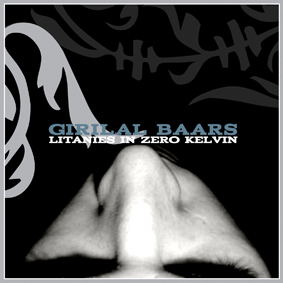 Old folk songs have no need to be reinvented. They have no needs at all. But like our memories of the dead, we must resurrect them from time to time, because they cause us pleasure, dread or pain.
The central theme of Litanies in Zero Kelvin is death, the final entropy state. Death has never held any intrinsic meaning to me. But there are bound to be some spiritual mysteries involved in any attempted rapprochement. The songs I use in Litanies are not strictly speaking sacred, though their intentions are often just that.
The sources are mostly old Russian folk songs and English ballads. The imageries of the words, but also the cosmologies which inspired these songs, have moved and terrified me since the day I learned to sing them. James Joyce's one hundred letters of The Fall are a natural choice as facilitators of the transition from the old and familiar to the new and incomprehensible. As is it's contemporary - the theremin with it's space-age connotations.

Born in Moscow by Dutch and Indian parents, Girilal Baars is a musician, singer and composer living in Uppsala, Sweden.
_____
Contact:
http://www.girilal.com
guru@girilal.com

Reviewer: PlayAll - favoritefavoritefavoritefavoritefavorite - July 12, 2010
Subject: Thank you Girilal
This one has pushed my boundaries of musical perception beyond the horizon, I am ever thankful. There's not much in the abundance of today's music production that is so advanced. The guy's a master of his art and apparently a very deep personality, with a broad vision of the world and humanity. You who don't get it are just intellectually and spiritually underdeveloped, hope just yet. I would have said "hopelessly", but I remember for some years ago I think I wouldn't be able to understand this music either. So grow.

Reviewer: MetroBase - favorite - April 8, 2010
Subject: Your Kidding, aren't you???
What is this? Stop insulting our intellect. Don't expect us to get all wordy and profound about this track. Do you want us to find some hidden meaning or justification for this waste of time. Truth be told I trashed it after a minute and half. My man, don't waste bit-rate and don't quit your day job!!!!
Reviewer: ojdo - favoritefavoritefavoritefavorite - April 7, 2010
Subject: While I don't like it either...
... I would not dare to low-rate the release's quality. It is very well produced vocal art, much "better" (a brave word to use when classifying art) than much I have seen/heard in museums of modern art.

Yes, it is experimental, it is atonal. I would not describe it as music. But after all that's what this netlabel is about: "expanding the definition of music."
Reviewer: lis2000jet - favoritefavoritefavoritefavoritefavorite - April 7, 2010
Subject: Great sound
Absolutely excellent and not ordinary music!
And not indifferent ears "bahgheera" only confirm it :)
Reviewer: bahgheera - favorite - April 7, 2010
Subject: Really?
What is this? I didn't make it through the first 1.5 minutes before words like 'moronic', 'asinine', and 'absurd' started bouncing around in my mind. This is not music. This isn't anything, just a guy making ridiculous noises into a mic. Don't call it experimental, don't call it avant-gard, don't call it anything. If you listen to the entire 30 minutes of this, then you have no sense whatsoever.

Make some music! The internet has enough of this mess!

Uploaded by Clinical Archives on April 7, 2010